Mistakes? I (we) make them. When I muster the courage to fess up to one it’s typically not minor and is the result of still believing everything I read on the web is written by a subject expert, not thinking something through completely, or not reading the directions correctly.

The 2017 year for the Live Well Farm apple orchard was average at best in terms of quantity and quality of the apples we produced. Still, it didn’t deter me from making my annual release of LWF hard apple cider. I harvested apples over a couple different periods as their internal sugar content reached its peak for 2017. The initial crush went well as did the fermentation process with champagne yeast. This had the potential to actually be a pretty good year for LWF cider despite the average apples.

The only thing left to do was the back-sweetening process which reintroduces an appropriate amount of sweetness back into the cider that had been removed by the fermentation/alcohol production part of the process. I’d done this before, what could possibly go wrong?

I quickly reviewed my recipe and added the ratio of my secret sugar and cinnamon mixture back into the cider .. ah! Perfection! Great taste, nice body, apple cinnamon aroma, and honey color. Into the bottle; 10 cases. 2017 done! 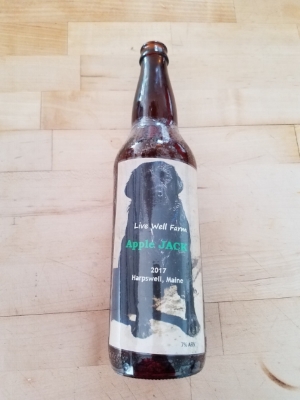 Two weeks later I noticed something odd when uncapping a bottle. The effervescence level was elevated and the taste was not what I remembered. It was bad apple champagne on steroids. The next day my son called informing me that one of his bottles had an even more violent reaction when it was opened. The cider was alive and not happy?

As I uncapped more bottles it became apparent that 1.) I had misread my own recipe for sugar addition (tablespoons versus teaspoons!!!) and forgotten some other high school chemistry that goes along with it and 2.) I was making a big foamy mess in the bottling room with each exploding bottle cap. The residual yeast in the cider had done exactly what nature told it to do (eat the sugar, turn it into alcohol, and produce carbon dioxide – and lots of pressure!). All 10 cases of pressurized “cider bombs” were uncapped/ignited and poured out. My mistake re-taught me a great lesson; not how fermentation works but to read the directions carefully, not quickly.